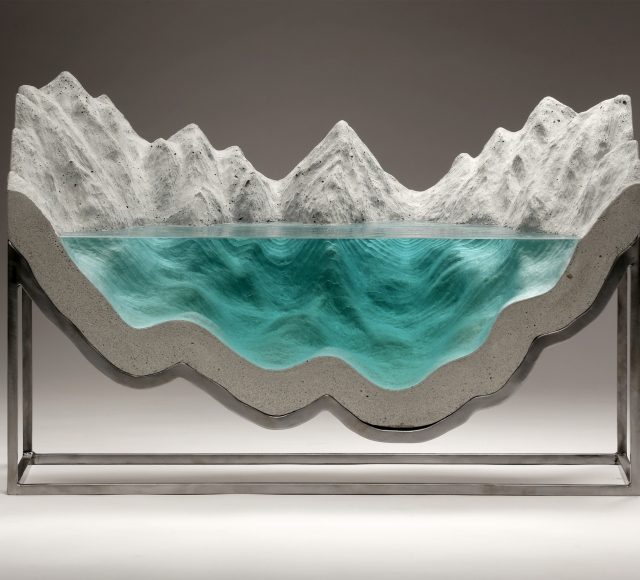 My memories of New Zealand in the 1980s are succinctly personified by Ben Young’s sculptures of glass and concrete: of the homage Kiwis give the seas surrounding the narrow strips of North and South islands they call their homeland, with weekends whiled away sailing, picnicking by the coast or strolling along the marina; making this Australian-born, New Zealand-bred artist’s passion for surfing highly comprehensible and his ocean-themed works of art even more so.

Of the highly prized given of being able to enjoy the immensity of your own personal space when you are out and about, even when you are walking down Queen Street, the main drag in the heart of Auckland, New Zealand’s largest city, in the middle of the day. And this wonderful luxury of living in a country where its number of sheep far outstrips its headcount of people imbues Young’s artwork with the charming serenity of the solitary chap happily fishing off the very edge of an isolated jetty, of the lighthouse blissfully perched as the only building on a remote outcrop gently caressed by lapping waves on all sides, of the single sail boat on a solo voyage round the world, of tiny tranquil islands deserted but for 2 to 3 swaying palm trees waiting for the lone sailor to cast anchor on its gentle shores.

A serenity that can be confidently enjoyed by one and all as to this day the majority of Kiwis leave their doors permanently unlocked – be it home or means of transport; testimony of a country where even its wild life harbour no ill will towards the people who share their habitat. Hence, Young’s glassed oceans flow in calm ripples, with ever so mild slaps of surf caressing the base of his lighthouse; a wonderfully marked contrast to husband and wife glass artists Paul Desomma and Marsha Blaker’s works of frozen molten glass waves violently caught in mid crash.

A serenity that so attunes New Zealanders to the natural and its inherent charms; along with affording them a sensible pace of balanced life; that I have gotten off the train at each of their small towns to find a sizable public gallery displaying amazingly high quality local art and entertaining live performances by its own homegrown theatre group. This innate appreciation of the aesthetics in Young’s DNA bestows his art with a sublimity that conjures up life in the bucolic country a la Jane Austen’s societal niceties and civility delightfully without the formality.

A serenity enhanced by a simplicity exemplified by a New Zealander’s nonchalance towards what the rest of the world deems to be the current height of fickle fashion. Hence the un-art trained Young’s obvious decision on using the materials he intimately knows to create his mildly crested seas – sheets of 4mm float glass that we find in windows and a glazier’s oil filled glass cutter; totally oblivious that Australian glass artist Sergio Redegalli has sitting in the Adelaide Botanic Garden his “Cascade” glass sculpture similarly constructed on a 12 ton scale in 1988, and that Italian art maker Mario Ceroli’s “Maestrale” of crashing waves had been fashioned from thin layers of cut glass too in 1992.

An oblivion that blissfully allows Young to subconsciously draw from not just an eternal fascination with the shoreline’s pristine waters but from what they caressingly lap against to unwittingly transcend the glass art already masterfully created by Redegalli, Ceroli, DeSomma and Blaker: his glass creations are seamlessly melded with cement as softly undulating as some of Singaporean Jeremy Sharma’s “Terra Sensa” – a series of large polystyrene foam boards whose surfaces are carved with sublime wavy patterns based on the electromagnetic pulse of dying stars.

An undulation concrete as a basic construction material physically and visually, textually and colour-wise contrasts beautifully with the glassed waters and the bronzed miniaturised fisherman, sail boat, lighthouse and palm trees. One that concurrently perfectly encapsulates the terra firma endlessly coasting the poetic Bay of Plenty – the place in New Zealand’s North island where Young has spent most of his life – and its uninterrupted rippled furrows below the tranquil splashing waves.

A feat all the more astounding as this current Mount Maunganui resident continues to this day to design his art the traditional way with which he had first trained as a boat builder: from complex planning to drawing templates, constructing models, making custom jigs and crafting from sheets of glass – all by hand. A beloved liberty as he then has the complete freedom to dramatically change his starting point based on the innovative method he has finally ingeniously found to skill-fully layer the delicate glass to aesthetically create the exact 3D shape he has initially expressed in his 2D drawings.

This oblivion to even the graphic and visual arts worlds’ passion for computer-generated drawings has stood Young in good stead too as he was the 2014 finalist in the Australian New South Wales’ Wollahra Small Sculpture Prize as well as the Ranamok Glass Prize for Australia and New Zealand artists, whose winning pieces are donated by its organisers to the National Gallery of Australia.

For Young has wrought a magical play of evocative light with glass and concrete beyond what the Bangkok-based French artist Val has attained with her spotlighted bronze and glass sculptures just before God called her home whilst winsomely negating her artworks’ sense of humanity’s loneliness by espousing the bountiful paradise in New Zealand’s cherished solitude.

Dive into Ben Young’s “Sentiments of the Sublime” at Red Sea Gallery, Block 9 Dempsey Road, Singapore 247697 while the exhibition runs from 6 October to 5 November.