Posted by Rachel Poonsiriwong on Saturday, May 21, 2016 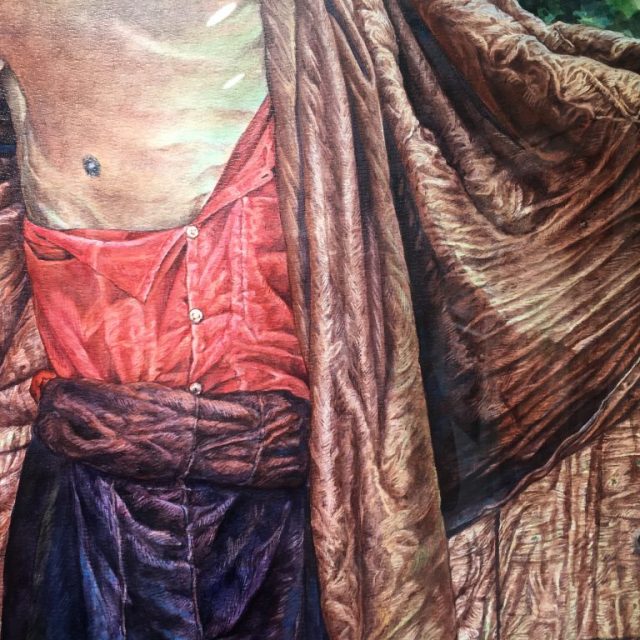 It is difficult to perceive figurative paintings of traditional Southeast Asia as part of the Singaporean contemporary art scene. Art-lovers collectively give the limelight to other art forms that have turned popular, such as brilliant conceptual pieces, immersive experiences, or photography. For example, President’s Young Talent 2015 Ong Kian Peng pulled off a joint-win with his breathtaking immersive installation, Too Far, Too Near about global warming. Just recently, Charles Lim made headlines with his eye-catching videos about our relationship with the sea, during his 2016 exhibition at NTU Centre for Contemporary Art Singapore.

This disconnection illustrates that, as Southeast Asians ourselves, we struggle to identify our urbanite selves with the tune of a ranat ek, or the pungent fishy smell that emanates from the sea. This disengagement is particularly more severe for me, a young Singaporean, who has seen only urban landscapes her whole life. Yet, Malaysian watercolorist Chang Fee Ming’s spectacular paintings in A Traveller’s Diary are much more than foreign, detached scenes of the past.

Chang Fee Ming was born in the coastal state of Terengganu, Malaysia. He travelled constantly through Southeast Asia, as well as other parts of Asia, and painted ordinary people and landscapes over thirty years. Chang’s solo exhibition, A Traveller’s Diary at One East Asia, serves as a capsule to all his travels, and tells the story between him and Daniel Komala — his good friend and collector.

From start to finish, A Traveller’s Diary is no ordinary exhibition. Although Chang’s works are placed in a typical white cube interior, I was pleasantly surprised that the curatorial narrative took on a more immersive slant. For example, viewers can look forward to being enraptured by traditional Southeast Asian music playing in the background. Flowers sit attractively among some displays, and old monochromatic photographs of Chang and Komala accompany Chang’s works. None of the works are on sale, either — only verified prints are. Nearer to the door, old envelopes from Chang to Komala are featured, both affectionately illustrated by Chang.

Still Hoping, 1998 is the second painting of Chang’s that Komala acquired, and one that caught my eye due to its sheer mastery of skill. While its colour palette and delightful visual mixing of colours caught my attention, the subject matter was equally enthralling — according to Chang’s book (also called A Traveller’s Diary), this moving portrait of a rickshaw driver with his sunburnt and wrinkled skin, carries “a perhaps ironic message of hope for a bright future in the idyllic snow-capped mountain landscape painted on the vehicle’s wheel guard”. Komala had brought it into his collection during the Asian financial crisis, when his family business was under threat, so it holds some personal significance to him.

It was at a table display that I spotted Ceremony, 2001, Ink on Paper. Ceremony is a sketch of few men with headwear, who appear to be holding candlesticks, and one of the many sketches Chang makes of disappearing scenes of communal life in Southeast Asia. An eye-catching piece of its own, I was also interested in how the table display was conceived. Taking a closer look at one of Chang’s old photos of himself painting a woman, I found that it was an attempt to recreate the table in that photo, adorned with deity statues, an old door and the same rattan background! How clever — A Traveller’s Diary is a generous attempt to immerse the urbanite viewer into Chang’s memories, to show him the beauty of fast-fading Southeast Asian scenes.

You may head down to One East Asia, 15 Scotts Road #09-03 Thong Teck Building, Singapore 228218, to view A Traveller’s Diary by 10 June 2016. Opening hours are 11am-7pm Mondays through Fridays, and the gallery is closed on weekends and public holidays.