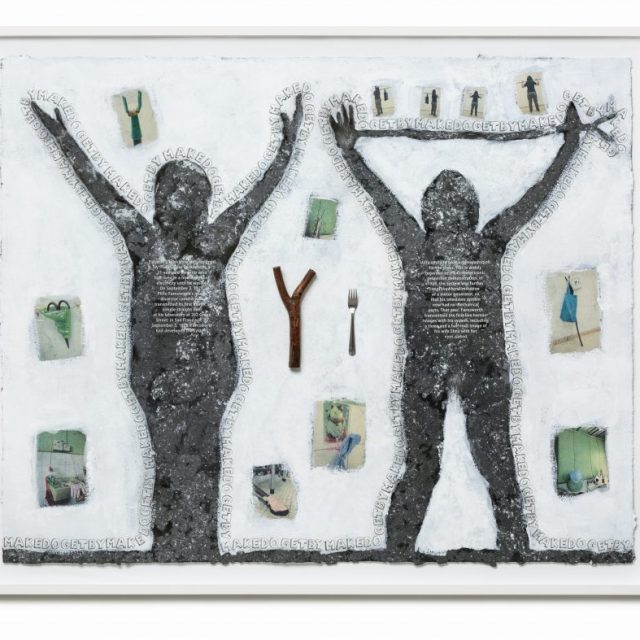 Singaporean Amanda Heng’s expansive single artwork in “We Are The World, These Are Our Stories” exhibition, with its QR codes that access online audio and visual recordings as part of 12 pairs of prints correlating personal value placed on a cherished object with global events, promises instant appeal to the IT gizmo-connected Gen Ys and Millennials.

Yet the crux of her new visual creation engages chiefly by effortlessly and winsomely drawing me into thinking about how its stories of 12 individuals resident in Singapore compare to my own life as a tail end baby boomer and not quite 200 years of family history in said same tropical island.

The pair that reveals Shaw Chia’s fascination with his antique Rolleiflex camera and his QR coded slideshow of photos carrying people’s memories of their grandfathers instantly bring to mind how few group family photographs mine has in our possession, though I have squirreled away my parents’ and paternal grandparents’ wedding studio shots – especially of mum at the height of fashion in her white princess bridal gown and of grandpa looking dashing in his tuxedo replete with top hat, despite the grueling equatorial day temperatures prior to the invention of air conditioning.

Why the lack thereof? From as far back as I can remember my parents, with their siblings and in-laws, enjoyed mahjong marathons most weekends, and mum the career woman left me a happy latchkey kid after school; building my enduring independence and freedom to pursue whatever drew my fascination without prior adult encouragement or ongoing supervision.

Still the sentimental value STPI senior printer Chong Li Sze places on the laundry pole stick severed from a guava tree by her great grandmother strikes a chord: my paternal grandma died when I was 16 and I have to this day the mirror she had used in her morning ritual of fastidiously applying facial cream – a habit encouraged by her ma and grandma as she blossomed into a young lady. One she so faithfully continued, despite World War II bankrupting our family, she passed on at 69 gracefully retaining supple sun-kissed skin akin to a 20-year-old’s.

Additionally mirroring my own life is radio DJ and Ngee Ann Polytechnic student Heidi Tan’s treasured recollections of her mother’s favourite songs, along with inheriting her gift in language and passion for poetry, as I can to this day sing the lyrics to scores mum played on her piano while I was but a little girl; be it Doris Day’s “Secret Love” or Bing Crosby’s “White Christmas”; and hum the tunes from dad’s record collection that ranged from Mantovani to Carole King.

Thanks to a 9th birthday surprise of an abridged version of Jane Austen’s “Pride and Prejudice” from mum, I went on to read works by the Bronte sisters to Fyodor Dostoevsky’s in my teens. Inheriting her father’s much-loved Reader’s Digest Condensed Books extended my childhood interest in Enid Blyton’s and Alfred Hitchcock’s investigative fiction to adult crime thrillers in print and on screen, while igniting an enduring delight in Gavin Maxwell’s “Ring Of Bright Water” and Helen Hoover’s “The Gift Of A Deer”, given their longstanding truths of lasting bonds civilized man can form with animals born and bred to the call of the wild.

Lim Wei Qi’s thoughts on assimilating maternal love from food her mother had prepared for her similarly belie mine: my fondness for all things sweet – from ice kacang to Black Forest cakes – I acquired from mum; while dad’s preference for Malay, Indian, Peranakan and English food over Chinese ones extended my gastronomical desire for cuisines that span the continuous land mass between Western Europe and South East Asia, along with time-honoured dishes enjoyed in Africa and the Americas.

Having a grandfather whose “a craftsman who loved working with his hands” has made an indelible impression on Tessa Chung, a curator at STPI; especially when her family has kept his creations – from bird-shaped windmill toys to miniature cupboards with little shelves. Any wonder then, with dad’s enthusiasm as Mr Fixit around the house, and intuitive preference for the aesthetic, the man I love and married is imbued with an abundance of both too?

Whilst LaSalle student Suraya Binte Mohd Yusof sharing her notions of home in an audio recording and Hamidah Abdul Karim arriving at the concept of respect after researching her illustrious family tree reaffirm the reality of having mum’s great great grandpa mentioned in Ong Siang Song’s “100 Years’ History of the Chinese in Singapore” – published in 1923 – as the first dentist to settle on its shores, as well as having a few streets near Beauty World Centre named after her side of the family firmly rooting my history to this little red dot under the sun.

And just as STPI’s senior printer KC Poh remembers care-freely playing with old Singapore coins – some dating as far back as 1889 – at her grandmother’s, so do I, and of ancestral stories of the Japanese forcing the island’s inhabitants into swapping their money for the fiscally worthless banana currency endlessly printed during the 2nd World War; and thus in one mighty stroke impoverishing almost one and all; setting in motion its subsequent economic and social mayhem that catalyzed its residents’ desire for independence from colonial governance.

Even then I agree with Quek Siew Chew Joy’s conclusion that “a choice at a critical juncture… has changed (her) personal and (her) children’s fate, and today (they) feel that everything is the best arrangement”. As dad’s bloodline had voyaged from Canton to Singapore with gold tied hidden around their waists for the adventure of a totally different way of life shortly after Stamford Raffles first set foot here, the hardships arising from the Japanese Occupation were but temporal, for being here saved us from an infinitely worse and more permanent destiny – of a life time of severely adverse physical, emotional and psychological traumas as communism eventually swept through and entrenched within China.

Like the overwhelming majority on this isle, my forebears consequentially decided to take up Singapore passports over British ones when given the choice by the out-going UK government in the 1960s – this unifying moment in time rallied the trouble-stricken young nation round Lee Kuan Yew’s People’s Action Party; making the country the economic miracle it remains today.

Nonetheless this national achievement has its costs: Mr Eng recollects his family moving out of their prawn farm in Jurong in 1974 to a public housing project in the Boon Lay area; thus losing a much-loved affinity for the natural afforded by an agrarian lifestyle. Well, dad’s fondest memories were of his toddlerhood on his grandpa’s huge tropical fruit orchards… and his pet peeves? The constant invasive airing of Mandarin adverts on Mediacorp’s English television networks since the 1990s, along with shop assistants, and even medical specialists, holding the erroneous automatic assumption that he spoke no English, or at best only Singlish, once his crowning glory had started to silver – thanks to the republic being primarily peopled by 2nd and 3rd generation citizens; resulting from rapid population growth via an Asian immigration that stays ongoing into a tomorrow of tomorrows.

Fortunately I experience not the slightest STPI’s assistant printer, Haruka Hikita’s bewilderment of where home is after she left Japan to live in France, Australia and Singapore. With a lineage of 6 generations here, my identity is solidly embedded in what I have through the journey of life profoundly corner stoned in mind, heart and spirit. Home will always be where I can trustingly manifest my resultant hybrid shades of colours freely – as espoused in Eitaro Ogawa’s memento of his trip to New York that landed his job as Haruka’s present boss.

Be likewise irresistibly seduced by the 12 narratives’ universal concerns of self, family, community, home and nationhood into reflecting on all facets defining the very core of your central being before Amanda Heng’s exhibition ends on 25 February at STPI, 41 Robertson Quay, Singapore 238236.