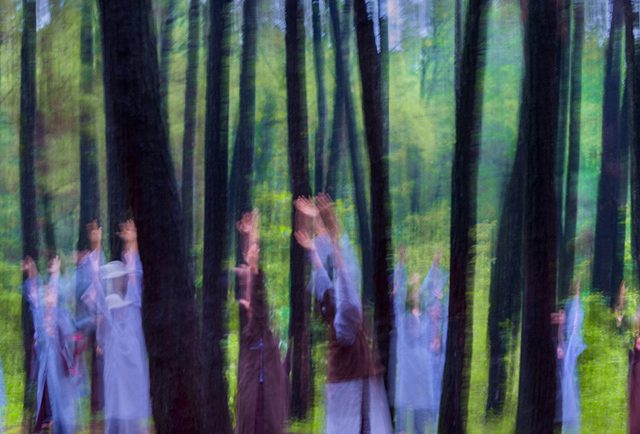 June’s selected art exhibitions give prominence to the works by esteemed artists in the Asia Pacific region; spanning antique artworks to modernist creations and finally contemporary but equally creative pieces – all dwelling on the issues and aesthetics that continue to be of resounding importance in our current day and age. Viewing the paintings of Si Jae Byun is like peering through a looking glass at wondrous worlds caught in the act of self-creation. Influenced by subjects as divergent as construction sites and chromosomes, her overriding interest is in the coexisting realities these objects can suggest; inside and outside; physical space and psychological space; the natural world and the man-made.

As This Korean artist’s arts education covers painting, textile design, new media, and set design, she is able to seamlessly negotiate ideas between multiple mediums and fluidly move across various projects. It is also directly responsible for her current canvas of choice – silk. Using 2 to 3 paper-thin sheets of this material as base, she draws and paints over each layer, building each painting; allowing her to employ the space between the layers as part of the work, creating a unique structure that incorporates an element of distance within the painting itself. Australian artist Tony Twigg is well known for his found timber sculptures. In this exhibition he looks backwards as well as forwards in his work, to what it might become while drawing hindsight from and hence altering its past.

“I have been fixing some mistakes. Going over old ground, revising to improve a piece, scrapping other works and taking audacious risks with some. All with the aim of reconciling my past with my present (and) establishing connections – those found and those forged across decades that merge fact and fiction.

The oldest work here dates from 1987. I can remember what it looked like then but what remains is fact, fragments surviving past memory into the future…

…I walk across my studio to the storage racks, pull out a picture from say 2006 and begin with it again. Was it a day or a decade that passed? Of course it is ‘yes’ on both counts. The picture is a collapsed body of time that accommodates both fact and fiction in a single moment.

Orwellian “New Speak” parodies a revision of the past so that it matches the requirements of the future. Politicians devise a similar switch by judging the past by the standards of the present. Contemporary culture abandoned the constraints of that linear narrative in favour of an associative structure. It is a kind of time travel that allows the passage of time to become a single object.” The exhibition by Mornington Island Arts artist, Sally Gabori (c. 1924-2015) celebrates her life as a courageous senior who revitalized her people by the seemingly insignificant decision to lift a paintbrush to a canvas.

From extremely humble beginnings till the late 1940s, Sally lived on Bentinck Island with her people, the Kaiadilt, who had remained virtually untouched by any other culture or people group. A drought, a cyclone and contaminated water eventually forced her and her people to relocate to Mornington Island nearby, an upheaval so traumatizing that their language has become almost extinct.

Nearly fifty despondent and disorienting years later, Sally entered the Mornington Island Arts centre and began to paint, finding her new voice – one stronger than she had ever known – in the expansive movement of her brush and the broad contemporary shapes of bold colour.

The present-day landscapes of her country, her husband’s, and her parents’ are the focus of this exhibition; best summarizing who and why she was and what she had become. And though she painted only during the last eight years of her life, everything that had happened beforehand had prepared her for this great opportunity to record what no one else knew how to express.

This show is, consequently, an opportunity to see a living and breathing memory of a disappearing culture and a nationally esteemed Australian Indigenous artist who now lives on in the masterpieces she has left behind for future generations across the world.

In 1907, the Lumière brothers unveiled the autochrome, a less complex and improved method of colour photography. Yet it was a tedious process as the long exposure required the subjects to stay still, and the failure to do so often led to a blurred image. This contributed to the distinctive aesthetic and painterly effects of autochrome pictures.

This is not unlike the unique aesthetics of Singaporean Melisa Teo’s photographic images presented in her solo show “The Light Beyond”. The 25 photographs are a result of her imaginative interpretation of light, with her camera her third eye, moving as her subject moves, coaxing the mundane into a mosaic of symbols and colours. The energy and narrative within each captured moment lives on in her pictures.

Light is vital to any photographer. But Melisa’s imaginative interpretation of it results in unexpected and strange tableaux of the familiar. Her images are never absolute renderings of life or the environment. They challenge viewers to perceive beyond the conventions while still serving as snapshots that document her pilgrimage as a globetrotting photographer since 2008.

Exhibition: The Light Beyond: A Photographic Pilgrimage

The exhibition “Christianity in Asia: Sacred Art and Visual Splendour” presents fascinating and beautiful objects that are the result of the spread of the Christian faith across Asia. Being the first large-scale exhibition in the world dedicated to this theme, it showcases many objects that were made by artists who were not Christians, and commissioned or acquired by some patrons who were not believers of this religious faith either.

Such artistic treasures created in the service of Christianity throughout Asia combines East and West. Asian materials and techniques were used to create stunning paintings, carved ivory figures, ceramics, furniture, altarpieces, and shrines that aided the spread of Christianity. And have been acquired by museums and private collectors in Portugal, France, Italy, the Philippines, and Hong Kong amongst others. Heri Dono is best known for his wildly imaginative installations of strong visual commentaries that explore sociopolitical issues and human behavior by adopting, adapting and revitalising the most popular Javanese folk theatre, wayang kulit – a traditional storytelling method that merges visual arts and song in the promotion of mythology, philosophy of life or social criticism, veiled by humour.

In his latest exhibition at STPI, he combines unconventional materials such as paper pulp and fabric or batik with sculpture and wayang kulit to develop his storytelling. Working along the theme of madness, his new works offer the humourous satire often associated with his fantastical hybrid characters and pop culture motifs through a fluid and colourful interplay of techniques and materials he had previously not explored.

Amidst the coherent elements of light and shadow, a paper-pulp installation surrounded by batik-inspired paintings, movable sculptures, etchings and screen-prints on canvas against photographs of STPI workshop machinery, we are reacquainted with Heri’s playful visual language that veil familiar social commentaries, and are introduced to his shift towards introspection, generating personal considerations about the role of the artist, a questioning of the art market, and the role of art in society.

Of hybrid creatures, graphic symbolisms, and references to the twisted logic of a topsy-turvy mind, the exhibition conveys “a position of resistance against a hegemonic discourse or perspective” as a whole.

“His multifaceted characters and narratives effectively destabilize binaries of right and wrong, good and evil, to reflect the truth of human complexities,” says Tan Suili, Curator at Singapore Art Museum. “In that respect, madness may be seen not as a negative quality, but rather a necessary state of being, a position of resistance which ironically, brings greater clarity and consciousness.”

Bukit Larangan was the earlier historical name for present-day Fort Canning in Singapore and, along with Borobudur, is a wellspring for the narrative and symbolic content for a number of pictures. They also constitute poles for signifying locations for Jimmy’s life, beginning in Singapore and now residing in Yogyakarta, Indonesia. And are, hence, thematic drives for examining his recent pictures of drawn human figures that have been bound by his interest in Singaporean art critic TK Sabapathy’s published narrative on the same theme.

Whereas figures in Jimmy’s earlier works are autonomously dominant, now they dramatise events and encounters between individuals derived from history and mythology; making elaborate depictions of landscape a requisite for these representations. He has consequentially expanded and complicated the twin foundations of his constants.

At the same time, his recent pictures become connected with the historical art traditions in Southeast Asia in which narrative is predominant, along with as yet to be explored modern and contemporary representations of narrative in this region. A selection of rarely seen works by the renowned Singaporean abstractionist Anthony Poon (1945–2006), from his estate, draws our attention away from his widely recognized large-scale sculptural commissions to focus instead on his earlier painting practice.

Historic canvases from the artist’s “Wave” series, among other formative works, are exhibited for the first time since his 2009 retrospective mounted by the National Gallery Singapore.

Being one of the most significant figures in modern Asian art history, Anthony was a pioneer of his generation, breaking new ground in the 1970s and 80s, one of the most vibrant periods of Singaporean art development. Known for his unswerving commitment to abstraction, he built a reputation for his luminous compositions of line and color.

This exhibition focuses on a critical period of Anthony’s oeuvre, which began in 1971 upon his return from his studies in London. Living there the young artist was exposed to artistic currents sweeping Europe including Geometric Abstraction, Hard Edge painting and Op Art, all making an indelible impact on him.

By the time Anthony resettled in Singapore, his practice had transformed dramatically. His “Kite” series drew on traditional motifs of Malay kites, inspiring him to create geometrically shaped canvases filled with patterns of optical complexity.

Yet it was his “Wave” paintings that would define his career. Inspired by the curvilinear form of frequency waves, the canvases consisted of undulating, billowing planes of color. Rebelling against the static nature of painting, he filled the works with movement and light.

In the 1980s, Anthony broke free of the constraints of the two-dimensional surface and began creating relief paintings using aluminum strips that perforated stretched canvas forming an armature. Through these three-dimensional works, he toyed with optical effects and spatial perceptions of painting. Highly experimental, these paintings were the precursors to his monumental public sculptures. Japanese duo Ken + Julia Yonetani translates the nearby environs and current political issues into works filled with aesthetic and humour.

For this exhibition, they present “The Last Supper”, a nine-meter table made of more than a ton of groundwater salt sourced from the Murray-Darling basin, and laid over by an exquisite banquet as a question on the “increasing salinity levels in Australia and unsustainable agricultural practices”, especially in the aftermath of the Fukushima Daiichi Nuclear Power Plant disaster.

Following this theme of promoting a safe sustainable environment are their “Crystal Palace: The Great Exhibition of the Works of Industry of all Nuclear Nations”, which comprises chandeliers produced using the now rarely employed uranium glass, which when exposed to UV black light emits a uniquely marvelous green glow, and its precursor, the “Grape Chandelier”, which, in contrast, is made of groundwater salt.

And driving the duo’s point effectively home is their “Three Wishes”, a small illuminated figure of Walt Disney’s Tinkerbell turning to the melody of “It’s a Small World”. Drawing inspiration from the 1957 Disney animated TV programme “Our Friend the Atom”, the duo creates Tinkerbell’s wings like those on the Pale Grass Blue, a species of butterflies known as Yamato-shijimi in Japan, and with bodies frequently malformed from radioactive contamination from the Fukushima disaster.

Information and photo credits: The respective galleries and artists