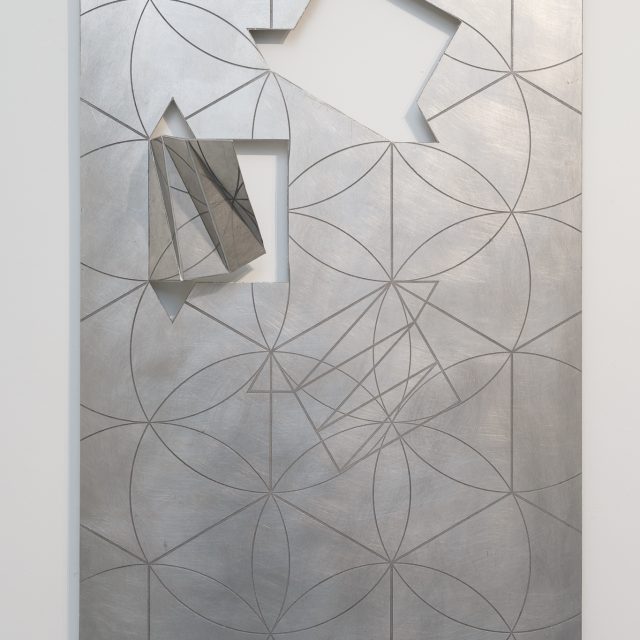 Malaysian born Shahrul Jamili Miskon’s ongoing “METALANGUAGE” exhibition at Chan + Hori Contemporary draws inspiration from the research he had done that had led to his graduation at this country’s International Institute of Islamic Thought and Civilization in the International Islamic University in 2013.

Excavating its concept of proportions and values in geometrical principles according to the work of Ikhwan al-Ṣafa; a group of mathematicians, astrologists and thinkers from Iraq in the 10th century; Miskon thus enthusiastically favours geometrical principles as fundamental junctures and philosophical footing in both art and religiosity.

He consequently pays homage to the Muslim time honoured tradition that Islamic decoration tends to favour geometric patterns over figurative images as the religion’s sure fire way of avoiding making the latter its objects of worship.

Derived from simpler designs used in earlier Greek, Roman and Sasanian cultures, these geometric shapes in Islamic art are often built on combinations of repeated squares and circles, which may be overlapped and interlaced – often combined with similarly overlay and interwoven arabesques; forming intricate, complex and often tessellated designs.

Some examples of these beautiful traditional geometric motifs in Islamic art – be it on kilim carpets, Persian girih and Moroccan zellige tilework, muqarnas decorative vaulting, jali pierced stone screens, ceramics, leather, stained glass, woodwork and metalwork – are on display at the Metropolitan Museum of Art in the United States of America.

Like these Islamic decorations, Miskon’s art are likewise created to lead us to an understanding of the underlying reality of art as ornamental transformation. For the traditionalists, it involves the transfiguration of mosques into lightness and pattern and the ornamented pages of a Qur’an into windows onto the infinite. For Miskon, it offers us generous peek holes into the earthshattering impact Islam has had on his own spiritual evolution.

Yet the similarities stop there. While conventional Islamic geometric patterns separate the concepts of the good and the beautiful in Arabic culture, with beauty in poetry or in the visual arts to be enjoyed for its own sake – without commitment to religion or morality, Miskon’s art has taken his very own contemporary approach of marrying artistic beauty with his own moral and religious grounds. As a result, he acknowledges that “METALANGUAGE” reflects faith and devotion as an image and inscription that could begin faultlessly but will transform beyond recognition if left unchecked.

Little wonder then though his artworks might have begun life when a geometric pattern is etched onto aluminium plates by their time in acid baths through a combination of chance and measured control, the aesthetic outcomes far exceed those achieved by mainland Chinese Wu Shanzhuen and Nordic-bred Inga Thorsdottir with their 2014 STPI-exhibited mono- and limited edition prints: “Seven Circles Little Fat Flesh”, “What A Form, Little Fat Flesh” and infinite tessellations in their “Perimeter of Little Fat Flesh” series.

Demonstrating the birth of Wu and Thorsdottir’s foundational polygonal shaped Perfect Bracket symbol – the “Little Fat Flesh” – from overlapping lines, circles and brackets during their earlier investigation into how base units such as a line, shape or pattern that make up all physical forms in the universe acquire their meaning, these works shown at STPI stayed claustrophobically confined within the overlap of both arcs of a bracket, and within its subversion of common thought for its pair to include or exclude anything.

Miskon’s series of artworks, on the other hand, are etched and physically cut ever so infinitely fluidly; with his organic ‘spontaneous’ overlying arrangements of serene circles, cheeky triangles and dainty lines – gracefully straight as well as sensually curved – breaming with the compulsive desire to gleefully bigheartedly spill over the seamless borders defining his rectangular aluminium plates.

All of which I would do more than joyfully hang on my walls: if I could, I would as happily sling them on my shoulders and arms as fashion accessories, along with wearing them like on trend jewellery round my neck or pinned on my matching dresses. For they deserve to be confidently shown to the world; being even more highly desirable than Issey Miyake’s Bao Bao totes, clutches, pouches and bucket bags, than Dot Sim’s Pools Necklace and Garden Necklace, than brooches by Maarja Niinemägi as well as Kye-Yeon Son, and than Bizuteria Betonu’s chunky concrete trinkets!

Owning one of Miskon’s effortlessly liquid geometric etched and cut plates will be as cherished as memories of standing in the well preserved exotically exquisite Moorish palaces, mosques, minarets and fortresses still remaining in Andalusia – all carefully built during Spain’s former Islamic centuries.

That peace I had felt while gazing awe struck at what the Muslims had painstakingly erected in this heartland of Al-Andalus between AD 711-1492 has finally been surpassed by that attained by my lingering contemplation of Miskon’s blissful wedding of religion with art.