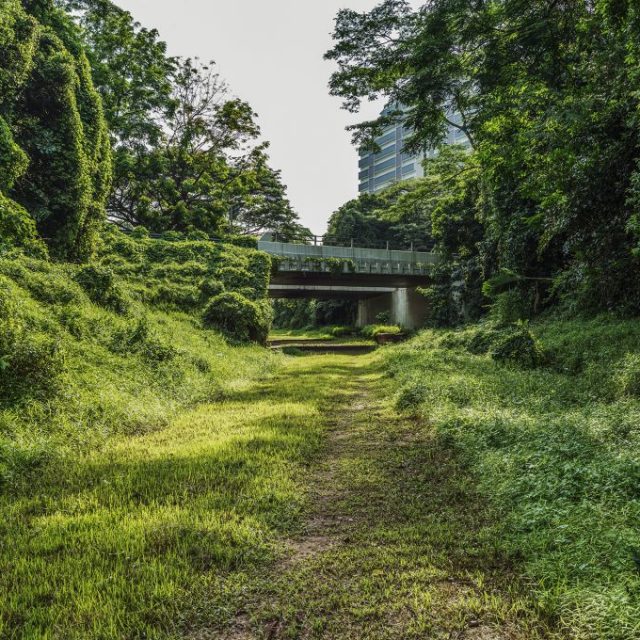 As we serenely dwell upon Kavita Issar Batra’s artistic inspiration from the natural in her surroundings, it becomes equally instinctive to cast our mind’s eye wider and further: How are other artists responding to their ecological environments? The group exhibition “Memories of China” features art by those born during and around the country’s decade long Cultural Revolution from 1966, with the explicit aim of displaying how they perceive their homeland and its art using the most traditional subject in Chinese painting – landscape.

The focus on the grandeur of nature had first sprung from a culture of contemplation inspired by Buddhism streaming into China before 1000 AD as well as from viewing nature with a new clarity wrought by the scientific mind that had perfected porcelain during the Song dynasty. Yet images of nature remain a potent source of inspiration for artists down to the present day.

While China’s landscape has been transformed by millennia of human occupation, Chinese artistic expression remains deeply imprinted with images of the natural world. But their landscape paintings are seldom simply representations of the external world: they are fluid expressions of the mind and heart of the individual artists – cultivated landscapes that embody the culture and cultivation of their masters. While grandeur lies at the heart of Chinese landscapes, Malaysian artist Tang Hong Lee’s “Enigmatic Landscapes” explores nature’s emotive rhythm, spirituality and mystical power in all its splendid forms and nuances of colours, and its lovingly enduring hold on his heart.

Executed with dramatic verve and a richly gestural technique imbued with great fluency and control, he has composed representational to abstract multi-faceted landscapes rich in imagination, embracing both its emotional and expressive qualities, evoking an atmosphere of dreamlike tranquility; engaging our emotions introspectively and spiritually. Nature’s beauty is not the sole catalyst to depictions that tug at our heartstrings. Chengdu based Tu Hong Tao’s abstract and fragmented natural landscapes draw breaths from his introspective, open-ended assessment of the intimate psyche of urban dwellers in a rapidly progressing nation marked by its hyper-capitalism and modernization. His strange melancholic landscapes of indeterminate forms thus narrate the tension between contentment and isolation that are ever so familiar to city living.

Adopting anachronistic techniques from classical Chinese painting to depict weird foliage and mysterious scenery, his artworks begin to portray new dimensions of time and space, reshuffling systems of information as it were. The primordial compositions are suspended in a liminal space between personal history and cultural paradigms, laying the foundations for a nascent, hybrid worldview.

Hong Tao’s art evidently elevates the displaced natural to a shrine-like existence; with a prominent altar perfumed by burning incense placed by countless dislocated Chinese praying for its splendid revival long before the generation to come experiences not missing what it has never had a chance to get to know. “Spirit of Place”, a group exhibition by artists living in ASEAN, takes this emphasis on the nuances of our surroundings a step further. Literally translated from the Latin term ‘genius loci’, the crux of this show references the essence that gives a place its complexity and uniqueness of identity. Not an immutable concept, it thus evolves over time, responding to changes caused by natural phenomena and human culture.

Landscape then becomes a critical way we experience place: physically sited within it in both its natural and man-made forms, the artworks seduce us to understand it as a way of framing space in relation to the societies and histories it emerges from. Undoubtedly, it becomes inherently subjective; making our landscape as one that suggests our point of view.

Through sound, photography, and the moving image, this exhibition’s art explore and imagine place and landscape as repositories of meaning as well as sites in flux; mapping invisible and intangible aspects of different natural settings, while revealing how they are respectively marked and manipulated by the environment.

We are thus invited by a living space and form of representation of place and landscape into continual discovery, shaping and interpretation. The reality that place and landscape are indeed repositories of meaning is given greater emphasis by photographer Caleb Ming in his exploration of urban planning and its ironies. Documenting plots of open land in Singapore that have been canvassed and marked for development into public housing, hotels, consumer multiplexes and more; he drives home the point that these open spaces will all be gone in no time.

And these disappearing sites may well be where we used to hang out. Not knowing how much we would miss these seemingly idle, and not doing much for us, spaces until they have been built over. Thus, Caleb’s photographs record their emotional aspects, of what these plots represent to us who use them, compelling us to ponder the ironic dilemma of losing our land to the development of the world.

His documented areas of open land; be it cemeteries, historical buildings, and old rail roads, airports and barracks, have often been mistaken for parks with manicured grass but without the street furniture or amenities around; raising a further question of when areas of nature conservation will no longer be viewed as sacred either – the proposed Cross Island Line’s encroachment of MacRitchie Reservoir being a case in point.

We are thus seduced to ponder if the native floral and fauna that share the space we live in are as important in defining the spirit of a place as well. And whether we would be more inclined to thus define it if they become major catalytic inspiration to the various artistic creations of an increasing number of Singapore-based artists.

And whether that inclination can be further cemented into our local psyche if more of us realize basic botanical and zoological research on wild species native to Singapore can yield ground breaking innovations that vastly improve our lives; as exemplified in Kieron Monks’ “Harnessing Spider Powers To Heal Human Bodies” for CNN on 25 May 2016.

Where: Esplanade Tunnel, located between CityLink Mall and The Esplanade. Raising Caleb Ming’s aim to a much loftier determination is New Delhi based artist and filmmaker Amar Kanwar’s “The Sovereign Forest”; initiating a creative response to our understanding of crime, politics, human rights and ecology.

In the exhaustive struggles over the resource-rich land of Odisha in east India and the issue of its ownership, the CRIME is the industrial interventions that have reshaped and permanently destroyed parts of Odisha’s landscape, making it a battleground on issues of development and displacement since the 1990s. The resulting conflicts between local communities, the government, and corporations over the use of agricultural lands, forests, rivers, and minerals, have led to an ongoing regimen of violence that is often unpredictable and invisible.

Amar has spent over a decade filming this travesty, making “The Sovereign Forest” his long-term commitment and collaboration with media activist Sudhir Pattnaik, and designer and filmmaker Sherna Dastur, to interrogate the politics of power, violence and justice.

His “The Scene of Crime” experiences a landscape just prior to erasure – all specific territories that are proposed industrial sites and are in the process of being acquired by government and corporations in Odisha. The act of storytelling and ways of seeing become pivotal to experiencing this terrain of conflict and understanding the personal lives that exist within this natural landscape.

“The Counting Sisters and Other Stories”, “The Prediction” and “The Constitution” are three large handmade books each with their own films projected on its pages. Containing local fables, stories of the incarcerated, and pieces of ‘evidence’ such as a fishing net, a cloth garment, rice seeds, a betel leaf, and newspaper embedded inside the paper, we are encouraged to turn the pages to read these stories of uncovered intimidation, forced evacuations, imprisonment and murder.

“The Sovereign Forest” thus asks critical questions: How to understand crime and the conflict around us? Who defines evidence? Is an illusion more real than a fact? Can ‘poetry’ be used as ‘evidence’ in trial? How do we see, know, understand, and remember disappearances? How to look again?

Information and photo credits: The respective galleries and artists