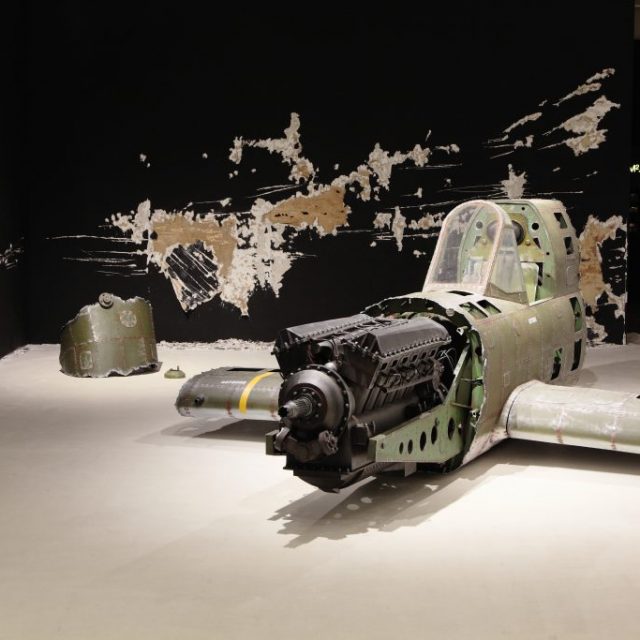 We can certainly do more than eagerly countdown towards the upcoming Singapore Biennale this October. We can while away our wait by leisurely attending the exciting selection of art exhibitions highlighted by SingArt. Exhibition: O Dear What Can The Matter Be

Singaporean Stephanie Jane Burt transforms Yeo Workshop to one where intimacies, vulnerabilities and instabilities unfold through a material language of the domestic, the decorative, and the everyday.

With a practice rooted in a material approach to fiction as well, Burt’s engaging storytelling narratives, of fairytales and magical spaces, develop spatially in meticulously constructed environments, with found and recycled building materials unexpectedly merging with unconventional ones.

Between their harshness and softness, a play of attraction and rejection, stability and vulnerability emerges as what appears solid is in fact on the verge of collapse. Frictions and tensions, hence, arise; with their subjected choreography of gestures – pulling, stretching and pressure – test not only their physical properties, but also their psychological state.

As an external stress is internalised, the stable installations are slowly led to a state of destruction by their emotional condition being caught in a moment of vulnerability and restlessness.

Hence, the vivid, brightly coloured materials’ joyful aesthetic contrasts with the constructions’ fragility; broadening the gap between what is perceived outside and what is experienced within. Exhibition: Fragility Of The Self

Bangkok-based emerging artist Kamolpan Chotvichai draws inspiration from her Buddhist roots in her exhibition, held in association with the 5th edition of the Singapore International Photography Festival.

Addressing issues of identity and gender in photo-based self-portraits, she challenges the formal limitations of paper and canvas; meticulously hand-cutting images of her body to create sinuous ribbons along various parts of her anatomy. Thus, eliminating her face and literally stripping away her physical form, in the process of relinquishing attachment to her body. And ultimately, obliterating her identity. Inspired by the word ‘plug’ and its semantic contradictions, Indonesians Andy Dewantoro, Aditya Novali, and Yudi Sulistyo seek to create a transitional space between a beginning and an end, bringing together vastly different methodologies and mediums in their exploration of multiple meanings within each artwork, including discourses on man’s relationship with nature, technology, and each other.

Moved by childhood memories of making toys from recycled materials and watching war-themed movies with his father, Sulistyo’s sculptural installation of a four-metre plane, modelled realistically after a North American P-51 Mustang, thrusts forth into the exhibition area, disrupting the usually immaculate gallery space.

His decrepit robust rocket also stands imposingly, dominating the physical space. Partly deliberately wrecked, it reveals accurately imagined and meticulously created internal mechanical components. This self-imagined damaged militaristic vehicle projects not the near future but the present; a dismal depiction of the shortcomings of technological development and the catastrophes that result from our inability to control the powers we seek to harness.

The fragile nature of Sulistyo’s recreated war machines undermines their destructive powers, reducing them to things of beauty.

This intricate maquette questions the background of real estate projects that sell the idea of improved social welfare, and whether the current style of housing provides sufficient space for the nourishment of not only the physical body but also the spirit: each of the individually constructed 160 rooms reveal their inhabitants’ circumstances in relation to the broader social context.

His “THE WALL : Asian (Un)Real Estate Project—The Abstraction” (2016) revisits the original work, extracting the essence of his initial concerns and presenting them in a more pared-down visual language. With Plexiglas as its primary medium, a built-in light source plays with shadows and illuminates the details of each of its rooms; creating a conversation between the realism within Novali’s original work and the ambiguous representation in his new.

Knowing that urban landscapes can shape a city’s identity more than the characters of its inhabitants, he eliminates all traces of human presence in his scenes. Focusing on the rigid constructions that shape the core of his canvases instead. Thus deliberately omitting all sense of vitality in the atmosphere, revealing modern man’s sense of displacement through architectonic metaphors. Japanese Takao Minami’s “Medi”, a 6-channel video work where 6 different vividly coloured landscape images move slowly and simultaneously, captures scenery that expands from mountains to seas, from urban to nature, and hence, from macro to micro; reflecting his wide perceptions gleamed during his travels along the Mediterranean Sea.

As he regards travel as a gradation, he challenges conventional methods of documenting and representing places: sceneries and sounds are cut and re-composed into a smooth continuation of collage-like changing images to realize a new representation of cultural differences; inspired by Chinese Southern school paintings and scrolls, where sceneries in the foreground and background are constantly connected by the effective juxtaposition of white margins.

Its 6-channel video format makes it possible for Minami to present his idea macroscopically as well; using margins to expand the possibilities of expressing space; revealing his belief that travel is a time-space transition, as well as his aim of reconnecting pieces of memories and sceneries into a smooth and holistic visual experience of this transition. A selection of iconic Surrealist artist Salvador Dali’s signed etchings and drawings from the renowned Pierre Argillet Collection are presented alongside porcelain works and tapestries, previously unseen in Singapore. Also featured for the first time ever is the historic display of two of his original copper plates.

The tapestries and porcelain plates were specifically conceived for museums – Dali’s Teatro-Museo in Figueres, Spain and Château de Vaux-le-Pénil in Melun, France, a Surrealism museum set up by Argillet. They were key in creating a ‘Dalinian’ environment in both institutions, with the first adorning the walls and the second used for table settings.

These limited edition plates, developed by Dali and Argillet in 1973, have subjects based on six of Dali’s famous etchings from the late 1960s. A famous porcelain maker in Limoges – Raynaud – was commissioned to create the designs with the ‘Bleu de four’, a technique specific to Limoges.

Dali’s etchings and drawings continue to reveal his open-mindedness and innate ability to embrace a plethora of topics and themes, from religion to eroticism.

The Argillet Collection results from the collaboration between Dali and Pierre Argillet, his publisher and confidante for over thirty years, and has been exhibited at Musée Boymans, Rotterdam; Musée Pushkin, Moscow; Reynolds-Morse Foundation, St Petersburg, Florida; Kunsthaus, Zürich and Staatsgalerie, Stuttgart; Isetan Museum of Art, Tokyo; Daimaru Art Museum, Osaka and the Hiroshima Prefectural Museum of Art, Japan.

The Collection permanently resides at the Museum of Surrealism, Château de Vaux-le-Pénil, Melun, France and Dali’s Teatro-Museo in Figueres, Spain. Communal parks are spaces of quiet potential, charged with metaphorical and symbolic meanings. In Singapore, where space is limited, parks such as Chinese Garden serve as a sanctuary for various communities to enjoy each other’s company. Every Sunday, recreational activities such as picnics by the lake and cricket matches on the expansive fields transform this otherwise idyllic location into a unique microcosm.

Referencing the hit 90s Malay pop song, Memori Daun Pisang (Memories of Banana Leaf), Singaporean emerging artist Khairullah Rahim’s “Next Sunday” exhibition intends to elicit this peculiar yet romanticised notion of the park as both a site of longing and belonging; showcasing new works that draw from the park’s landscape – featuring paintings, sculptures, and photographic documentations. A parallel project of Singapore Biennale 2016, the open-ended exhibition serves as a laboratory of ideas, exploring the indeterminacy and changeability of urban living. With its title borrowed from eminent Singaporean architect William S.W. Lim’s book of almost the same name, it takes Lim’s practice and the initiatives of the Asian Urban Lab he has started with colleagues in 2003 as a point of departure, and presents various researches into the spatial, cultural and social aspects of city life.

It examines Lim’s formidable oeuvre and methodology as an architect, urbanist, and an initiator of critical discussions on architecture, spatial justice, and development economics; tracing his role as the ‘great conveyor’ of research-based urban / architectural / design collectives by looking upon the networks of influences, ideas and people encountered during his multifaceted research and architectural collaborations across Asia.

Extending key ideas explored throughout Lim’s various collaborations are several contributors’ responses commissioned by the NTU CCA Singapore; like the selected moments of collective imaginings contributed by researcher and M+ curator Shirley Surya, the explorations of informal collaborative strategies by Jakarta-based research scientist Etienne Turpin, a selection of videos and films assembled by film scholar Marc Glöde, and smell researcher and artist Sissel Tolaas’ investigations of the city’s olfactory specificities by mapping a diversity of locations to bring to the fore the “invisible city” of Singapore.

The most sought-after ceramic sculptor in today’s Japan, Mihara’s works are testament to the austere, minimal and rugged beauty of the land of the rising sun; being high-fired stoneware of clay taken from the hills of his home in Izumo.

Formed through clay coils, and further shaped with his hands, Mihara’s solemn sculptures are fired up to three times in a gas kiln using variations of extreme reduction and oxidation, thereby creating the austere and poetic landscapes of his clay surfaces with a deeply spiritual and minimal poignancy that strikes our hearts. Hailing from Spain, Didier Lourenco invites us to engage in the emotions and the visuals of love, through a series of work from 2010 to the present, which chart his growth from Mediterranean landscapes to his current and most recognised theme, the Muse.

From working at his father’s print studio at age 19, he experimented with different styles and subjects, spanning various palettes and settings, including images of crowded plazas and Mediterranean landscapes. His current works remain representational in nature, but explore metaphysical concepts to create remarkable paintings that manage to capture and evoke fleeting moments and emotions.

In “Visible & Invisible”, he explores a myriad of backgrounds and contexts – from the crowded streets of a cosmopolitan city to the introspective quietness of a museum.  His subjects straddle the representational and the abstract, but share a similarity: they are engaged in or are the recipients of labours of love. Exhibition: In Light of the Ephemeral Silence

Inspired by elements of Western cinematic traditions, each work in Malaysian-born and Singapore-based Eric Chan’s new series of paintings is akin to a still frame from a film noir. We are confronted with scenes in tonal palettes of an imposing snow-capped mountain range concealed by blocks of colour, a forest of trees silhouetted in mist, crashing waves veiled by strips of light, amongst other atmospheric scapes.

Each artwork divulges as much as it obscures, and is laden with a teetering anticipation of what to expect after the fog clears. But Chan never reveals the next frame: the paintings are mise-en-scène to the vicissitudes of life, but he keeps the actors just outside the shot and never presents them.

Therefore what might have been just the background is thrust to the fore, quietly challenging us to contemplate and celebrate the inconsequential and inscrutable – a very often elusive and yet intense human experience.

The tension between the hyper-realistic rendition and mysterious glowing bands of light and neon shadows is palpable and interrupts the logical reading of the paintings – truth is deliberately withheld, and transient qualities of light and silence are permanently captured; giving rise to an almost cinematic experience of melancholy and of a temporal stillness in flux.