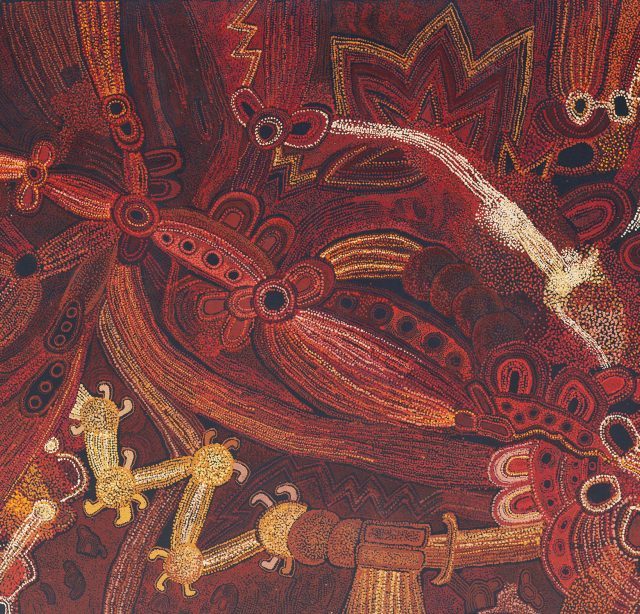 The aborigines of Australia have perhaps the oldest form of sacred geography, with its genesis through Alcheringa – the Dreamtime; where ancestral beings emerged as totemic animals and humans from Earth’s interior to wander over the land, creating landscape features through birth, play, singing, fishing, hunting, marriage, and death. When the Dreamtime ended, these features hardened into stone while the ancestral bodies turned into distinctive sacred hills, boulders, caves and lakes.

And the mythological wanderings by the totemic ancestors across the landscape are their Dreaming Tracks, or Songlines; each connecting the consecrated places of power, building a revered topography, a pilgrimage tradition, and a nomadic way of life for more than 40,000 years.

During the course of the yearly cycle Indigenous down under go on walkabouts along the songlines of various totemic spirits, returning year after year to the same traditional routes; singing songs that told the myths of the Dreamtime and that gave travel directions across the vast deserts to other holy places along the songlines to perform rituals invoking the kurunba, or spirit power of the place for the benefit of the tribe and its totemic spirits, and of the health of the surrounding lands.

With each painting being 200 x 300 cm in size, this truly unusually huge format allows sprawling and epic narratives from large tracks of country; demonstrating fundamental cultural thinking, while concurrently permitting artistic freedom to devotedly weave a spectacular amount of painterly detail; setting unique and sophisticated tones of the strong spiritual connection to both the act of painting and the process of narrating ones’ mythological beliefs.

So respected senior Law man and strong Pitjantjatjara leader Keith Steven’s “Piltati” depicts the Wanampi Tjukurpa – Water Snake Men Dreaming – for this sacredly located natural monument in the hills close to the Nyapari community, with 2 ancestral men symbolized by water snake motifs hovering above while simultaneously embedded in the topographical rendering of this region. Aiming to tell the tale of more than just these wanampi – snake men – spirit beings entering one rock hole and then appearing again, in a haze of smoke, from a cavity in another to eat the abundant kuyi – harmless small snakes, his gigantic canvas affords him room to unfold the dramatic narrative further: as minyma kutjara – two women – begin digging for a large kunyia – carpet python, the wanampi tricks them to spear it instead; causing it to rise up to chase them down for the kill.

Despite this understated and elegant sense of design, it is Steven’s intuitive interplay of colour that confounds the eye and magically creates tense drama in the work: as shades of cobalt blue and indigo shift to pale grey and light flesh tones, then merging to orange, vermilion and burgundy, we feel the wanampi rising from the rock hole in a cloud of smoke, murdering the two women; climatically encapsulating the metaphorical creation of Piltati’s land formations.

Teresa Baker, a Pitjantjatjarra woman from the Kanpi community, shares the intense passion and essence ever so crucial in seamlessly driving the creation of Steven’s powerful and expressive artwork. In her “Minyma Malilunya”, the sacred stories of the feminine genesis for the Malilu region are energetically crystalised by her dynamic compositional sense of motion and journey across the picture plane; inviting us to undertake a visual voyage through a mysterious landscape of the other worldly.

With black circular motifs representing waterholes in country, the bands of interconnected dotting display the dancing tracks left in the sands by Malilu, a crippled woman abandoned by her two eloped daughters, as she performed the Inma ceremony while dragging her mangled leg; struggling to collect bush foods including desert raisins, bush tomatoes, berries and many other kinds of wild flora.

With other equally distinct Aboriginal motifs embodying Malilu’s digging stick and collecting bowl, and with stylised representations of the bush foods she collected, Baker’s gentle colour shifts in the spotting are a counterpoint to the electric vibrancy of the painting’s overall visual appeal; infusing it with an extraordinary radiance enhanced by white and light pastel hues introducing a sense of brilliant light and warm sunshine. Paintings by the now deceased American artist Jean-Michel Basquiat float gently to mind when we contemplate her vigorous womanly aesthetics.

Without a consequential doubt the artists of Tjungu Palya Arts definitely continue to rightfully hold a special position in Australian art. Their simultaneous contribution to contemporary painting discourse persists to represent their strong cultural and political determination for living in their country as customary and current owners, partaking in regular ceremony and teaching their treasured way of life to the young.

Imbibe these very characteristic Indigenous representations of an understanding of Australia’s present as entwined with the memories of its remote environments’ pre-colonial life at the “Walkatjunanyi Inmaku (Painting Songs)” exhibition at ReDot Fine Art Gallery, 140 Hill Street, #01-08, Singapore 179369 during its run till 27 May.