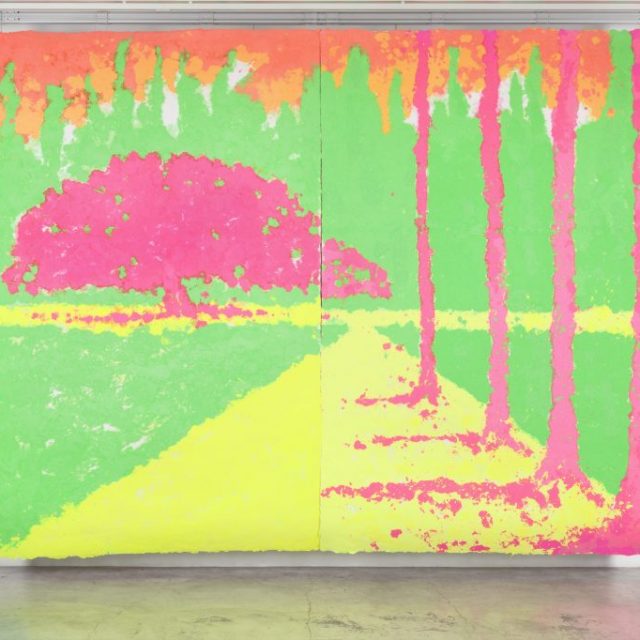 Fans of Shinro Ohtake will probably know that his unique and iconic ongoing series of “Scrapbooks” stem from his artistic belief of never creating something out of nothing; preferring to collaborate with what is already there in his own daily life, externally and internally, to concretize the real shapes built up within his progression of engrossing dreams.

And it is with this as one starting point that this leading contemporary artist from Japan undertook the creative task of innovating new works of art during his recent residency at STPI; tapping on what is already within his immense treasure trove of memories and existing artworks.

Firstly, he remembers that 25 years ago, he had made a series on dreadful Japanese cityscapes which he had deliberately made even more horrid with fluorescent colours; aiming to object to Tokyo pulling down lots of old beautiful Japanese-style architecture to build what is still in place today.

But he does not stop there. Instead, he goes on to ask: ‘Can a beautiful landscape remain beautiful with the very same neon colours I, as an artist, do not like? Can I create paintings that I do not admire? Can I find beauty in something that is ugly?’

Whilst another artist would be content to create with just these new musings as points of fresh inspiration, there is still much brewing within Ohtake’s mind. He has heard that STPI can hand make paper well beyond the size limited by commercially available printing equipment. When he realized that the maximum size achievable at the institute was through the use of wet paper pulp, he decided to paint his ‘unattractive’ flourescent coloured landscape on it; resulting in his truly expansive “Pasture” and “Yellow path 1”.

Even then his artistic inquisitiveness continues to churn: for one, these 2 paper pulp paintings are simple images made from equally simplistic colours, presently limited, by the humongous scale of the wet pulp, to him using a ladle instead of a brush. To paint realistically with the same tool on similar dimensional magnitudes becomes his future challenge.

For another, his challenge to STPI had stemmed from his existing desire to break the confines his “Scrapbooks” series endures in terms of paper size. Thus “Book #1 / Layered Memories” of STPI-colour-printed-and-spray-painted Ohtake-provided-images on paper large enough to fit its biggest screen-print mesh was born; additionally allowing him to move away from having to assemble the collages from found objects on each “Scrapbook” page by hand himself. A result that so intrigues him, he intends to turn “Book” into a series too.

Secondly, He recalls the catastrophic Japanese incident of 2011, when the mega Tohoku earthquake triggered a tsunami so massive the Fukushima Daiichi power plant’s cooling system failed; triggering the release of radioactive materials as its nuclear reactor melted down.

His once-unsettling concerns over the uranium spill lucidly brings to his mind its alternative label as ‘yellow cake’, fixating him with neon yellow and, through a quantum leap, with wonderings of how the images he had used in his “Scrapbooks” series and other existing artworks would aesthetically look through a lens of this very same shade of radioactive colour.

Thus birthing his “Yellow sight” series of emotionally intuitively assembled imageries, just like in his “Book #1”, with which he gives us the total freedom to view with our own experiential, cultural and historical lenses, and thus come to our own interpretations.

Even then, the emotional pull with which he decides to collect an object may at times be a subconscious process. Just as the colour yellow cannot be sniffed, so is the sound recorded on old vinyl records – sounds recorded of a period of time passed.. of someone’s memory… of his own life long interest in music.

Hence, Ohtake is once again compelled to ask, ‘Can I combine them together to make a sound visual? Can I also do so by screen-printing the yellow onto the vinyl?’ And the collection of these record discs he picks up in Singapore is consequently given new leases of life: he creatively embeds them in “Black wall” and “Yellow wall 1”.

Thirdly, he remembers that he was in Germany when the Fukushima incident took place – of how the beauty of the forests at Kassel had serenely offered him solace and holistic inner healing from his ensuing feelings of utter helplessness. And lastly, he reminisces on his lasting love for Japanese calligraphy and the enchantment he finds in using its ink brush to write characters.

The artistic consequence of synergizing both memories’ mutual optimism is a proliferation of restful monochromatic depictions of that inner restoration: the “Indigo forest” lithographic series, along with the black and white set of paper pulp paintings “Light in the forest”.

Unquestionably, the myriad of mediums, approaches and styles Ohtake has used at STPI sets him apart from other Japanese artists, who like him, have chosen not to expatriate from Japan to pursue their artistic careers. Unlike them, he does not like being pigeonholed as an artist: he is NOT just a neon coloured painter, as he is NOT only a “Scrapbook” artist.

He absolutely thrives on diversity: he is most keen on the process of trying to find an innovative way or solution to a persistent problem in justly making real what he sees in his multitude of dreams, especially when the issue at hand is one that he does not fully understand.

Yet once he gets to a satisfying answer… when he finally absolutely fathoms creativity’s question, he no longer finds the art he is realizing interesting, instantaneously mentally blocking his creative process.

Without a doubt, he only makes art he continues to not figure out… so he gleefully NEVER wants to comprehend his own work….

Ohtake is, thus, sublimely happy living with the chaos this lack of ‘artistic’ insight brings. Yet he likes the traditional Japanese tea ceremony – with its fixed rituals. Unsurprisingly, the enormous contradictions of these thoroughly opposing facades catalyze a tremendous tension within him.

Perhaps it is this very internal conflict that enables him to view the world beyond the conventional lenses used by tradition-sacred Japan: the crucial catalyst to the eccentric queries he is inspired to pose to himself, to finding common neural synaptic nodes between distinctly different concept maps he mentally holds, and to embracing technologies foreign to his existing artistic practice  – all in his unquenchable quest to push his oeuvre’s evolving boundaries.

Categories: Artist, Exhibition, Feature Articles, Things to do in Singapore