Sonance: A Spatial Oeuvre’s Tuning In 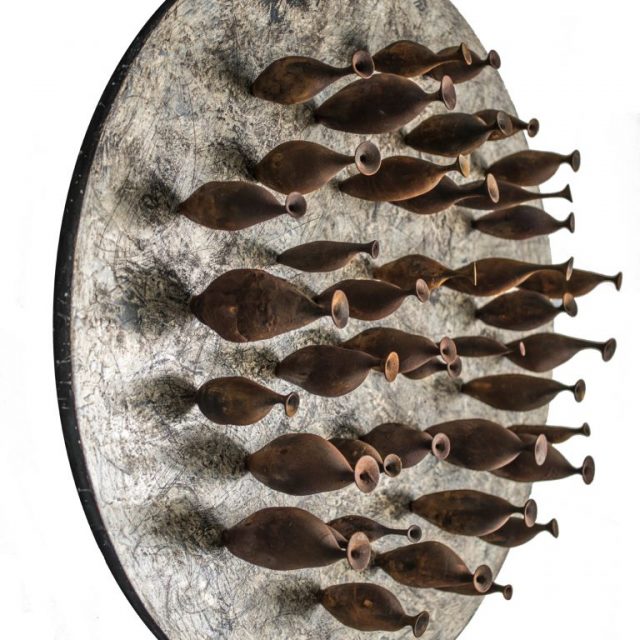 Sound expert Julian Treasure advocates ‘designing for our ears’ while contemplating the quality of architectural space for communication and exchange. And there are now actual ingenious examples where sound is integral to contemporary building design: Mark Nixon’s bridge in Aarhus, Denmark has 600 gold anodized aluminum pipes attached to its bottom, allowing everyone crossing it to ‘play’ the instrument.

Concurrently, designing sound into the arts has led to state-of-the-art arty constructions; like Thilo Frank’s “Ekko”. Sited in Hjallerup, Denmark, visitors walk along its vortex of wood slats to create a living soundtrack as the sounds of their movements are recorded by built-in microphones, remixed and played.

SO-IL’s “Pole Dance” in New York’s Museum of Modern Art PS1 is another prime example. An installation with an immersive, interactive courtyard; visitors create their own sound experience by swinging a series of giant suspended rods. And the “Coexist” exhibition by The xx, Kyle McDonald, Aramique and Matt Mets is yet one winsome other: displayed in SONOS Studios, it has 50 robotic synchronized Sonos players engineered to unobtrusively follow visitors’ movements.

The involvement of sound in the visual AND performing arts is taken a step further by SIFT Studio as well as by Joyce Beetuan Koh and Ricky Sim: energetic people become integrally part of the woodwork. The former’s tunnel-like cavernous “Veer” needs participants bending and pushing through a polyester to initiate changes in light and sound; while Singapore-based duo, music composer Koh and dance choreographer Sim have been compelled to answer ‘What happens when dancers become musicians?’ with “Sounding Body”, where dancers perform a unique set of movements through a gigantic Chinese 7-string qin; their bodies becoming fingers plucking and strumming its strings.

So I had preconceived ideas when I went to view Spaniard Jordi Forniés’ latest works of art. To my utterly delightful surprise, his “Sonance: Sound as Body, Sound as Architecture” exhibition upturns all the exemplifications listed above. By entwining his training as a classical pianist, his practice as a music composer and his Doctorate in Chemistry with his current standing as a visual artist, the recent MA Fine Arts graduate from LASALLE College of the Arts has created art with a unique artistic language that uses his clear understanding of materials and their textures to explore their correlation with sound, and hence with form in its cause and existence.

The wedding bells for this wonderfully unashamedly polygamous marriage are Forniés’ understanding that as there exists differences in materiality from bronze, wood, UV photosensitive resin to nylon, there are concurrent differing qualities of resonance as defined by the shape of sound waves and vibrations. Hence, the design of his latest sculptures is fully related to the parameters defining sound; with variations of amplitude to those of frequency becoming his works’ central DNA; with some even only achievable through the use of 3D printing technology to realize these specific materials’ full potential and hence, their form.

At the same time, all these out-of-the-box art in “Sonance” dramatically become spatial events, material phenomena and cerebrally acoustic experiences of highly visible musical tunes with internal rhythms as melodic as the English language’s when subtly and skillfully punctuated with consonance, assonance and alliteration by linguists with the purest finesse: Forniés has become the interior designing equivalent to Walter Murch’s ‘sound designer’ for Chan + Hori Contemporary’s gallery space; ingeniously giving it further shape through the innovative creation of notions of materials, dimension, distance and embodiment.

Hence, revel in visually tuning our ears in to the spiritual litany of Jordi Forniés’ melodious spatial art at his “Sonance: Sound as Body, Sound as Architecture” solo exhibition at Chan + Hori Contemporary, 6 Lock Road, #02-09 Gillman Barracks, Singapore 108934 while it runs till 30 April.

The show is part of the 2016 Chan-Davies Art Prize annual awards offered by this gallery’s co-founders Angie Chan and Nick Davies to 2 students graduating with a BA or a MA in Fine Arts from LASALLE College of the Arts.