The ‘Heretic’ Of Higher Light 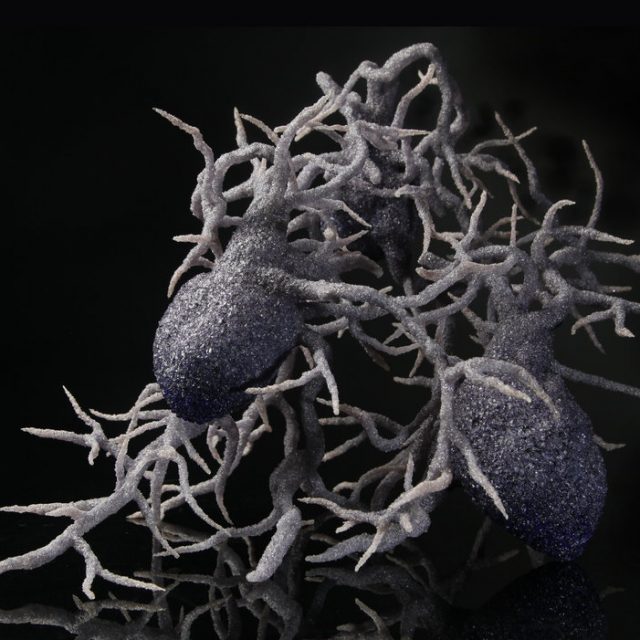 Singapore had waited in great anticipation for the Church of Saint Alphonsus to resume mass at its Thomson Road site, following 3 years of closure to facilitate building a much bigger and grander church.

Since conducting its 1st service in September last year, this dearly beloved Novena Church has pulled in masses of visitors wanting to see the island’s first truly cathedral like Catholic church, in the likes they have admired in Europe.

Friends have recounted in awe its stained glass windows heading for towering heights in the tradition of drawing worshipers closer to God in the heavens. I can easily imagine their horror if it be told that these windows’ stained glass were to be shattered to a million pieces.

Yet Australian-based Singaporean Suzann Victor has done just that – albeit with just stained glass. Violently crushed to terminate its iconic function of gently filtering coloured light into churches’ sanctuaries, the trillions of tiny shards of glass have been meticulously reworked into opaque shimmering coverings and exquisite sculptural forms of religious Catholic icons – angels, wings without angels – and of intricate hearts that pulse with its spiritual ideology.

The artistic results of an almost 2-year Gajah Gallery-organized residency that involved Victor’s collaboration with Indonesia’s Yogya Art Lab, her extraordinary body of work delicately yet precisely exudes a distinctively different iconic status and divine sensibility; inviting us to muse over the taken for granted givens in our personal beliefs; a natural extension of her ongoing inquiries into how we perceive, experience and make sense of our presence in the world socio-politically, religiously and physiologically.

Like Victor’s similarly inspired installation “Veil – See Like a Heretic” created for Japan’s “Sunshower” group exhibition in 2017 to 2018, the impetus in her current solo exhibition “See Like a Heretic: On Vision and Belief” at Gajah Gallery can thus be seamlessly extended beyond the unquestioned givens in any religion to all aspects of live – past, present and future.

It is an open invitation to hold fast to a particular action and position; to take a stand to “view, envision and believe from a perspective at odds with and outside of prevailing orthodoxy, conventions and traditions”.

And subconsciously queries the probability of those in all realms of authority today reacting as adversely as the early Catholic and Christian churches had when the outcomes discovered through scientific enquiry began permeating the fundamental fabric of European society.

Yet it remains decidedly mute on how those of us who choose to hold ‘heretical’ views of life and of the world in and around us should respond were we to face authoritarian pressures to conform. Do we draw inspiration from Mohandas Karamchand Gandhi, Nelson Mandela and Aung San Suu Kyi? Or even Mahathir bin Mohamad as he looks set to lead his opposition party to election victory at age 92?

By making the materiality of stained glass prevalent throughout Victor’s works, the exhibition additionally continues her ongoing experiments with the qualities of light. Think of her “Contours of a Rich Maneuver” that still swings within the National Museum of Singapore, along with her “Rainbow Circle” inducing natural rainbows to appear within this museum’s rotunda during the 2013 Singapore Biennale.

But the mile stone artistic experiment with light that “See Like a Heretic: On Vision and Belief” brings to mind is Victor’s “Bloodline of Peace”. Commissioned by the Singapore Art Museum in celebration of our nation’s 50th year of independence, it emphasizes that peace is a transient state defined by an absence of war, national bloodshed and individual conflict; arduously sustained by blood, sweat and tears of military legions, medical personnel and civilian contributions.

As such, as we determine on the ‘heretical’ stand to take, let us do so for the higher ideals in life – thriving for all a quality of life meeting not only human needs and aspirations but human rights as well.

“See Like a Heretic: On Vision and Belief” is thus an invitation to see Victor’s art and the higher beliefs that sustain us in yet a higher light.