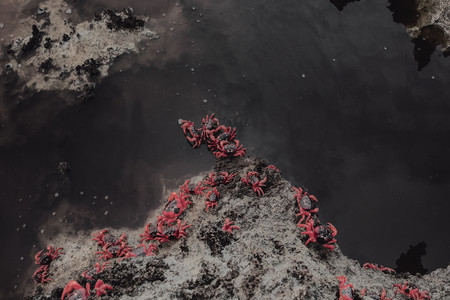 Andy Weir’s 2011 science fiction novel “The Martian” is a prime example of excellent fictional story telling woven around well-researched facts. His tale of American astronaut Mark Watney becoming stranded alone on Mars in the year 2035 and improvising to survive achieves enviable realism; attained through his study of orbital mechanics, astronomy and the history of manned spaceflight; basing the plot on existing technologies. Resulting in a pragmatism raising pertinent questions on man’s quest to one day colonize space so lapped up by Weir’s readers that Ridley Scott directed the film adaptation starring Matt Damon in 2015.

Comprising works commissioned for and exhibited at the Sydney Biennale 2016, along with previously un-exhibited works in the series – all having arisen from his research residency on Christmas Island between 2015 and 2016, Zhao focused on documenting imperiled and extinct animal species living and having once lived on this small volcanic outcrop in the Indian Ocean arising as the unintended consequence of human habitation for nearly 150 years; especially from their phosphate mining – the island’s main industry beginning in the late nineteenth century, and hence, from human settlers additionally bringing over invasive species like the common wolf snake and Asian giant centipede intentionally or otherwise.

Thus tipping the scales of the isle’s fragile ecological balance so drastically into the extinction of multiple native species and into the endangerment of those remaining – like the Christmas Island forest skink and Christmas Island pipistrelle – that conservation efforts include island-wide culling of non-native cats – as they instinctively prey on this land mass’s endemic fauna; and a call in 2010 to relocate its human communities to the Australian mainland.

Even then this geographically isolated part of the External Territory of Australia and former property of the Crown Colony of Singapore is teeming with natural phenomena, landmarks and strange unique biodiversity – like its annual breeding migration of huge red robber crabs from land to the sea, during which millions overtake the island; grinding all vehicular activity to a halt before a bridge was built to keep them off the roads then.

All these natural abundance Zhao faithfully photographed, and then with tongue snuggly in cheek appended them with his signature pseudo-scientific exposition and field notes!

In addition, his “Memorial to the Christmas Island Pipistrelle” installation – a solar-powered ultrasonic echolocator used to track the pipistrelle bat in the island’s eastern forest by picking up its distinctive squeak, and rendered meaningless with the species’ extinction in 2012 – serves as silent poignant reminder of this mammal’s permanent absence for those hankering to hear again its expressive call.

And Zhao’s elegant wooden “Memorial to the Last Cat on Christmas Island” belies its lethal function as a feral cat trap; relying only on pairing this installation with a resin cat skeleton standing on sand to deeply resonate the questions on power relations in the natural world with those of us familiar with said feline’s habits and weaknesses and with display strategies typical of natural history museums.

“The question of what is natural and what is man-made keeps popping up,” shared Zhao. “There was… a lot of extinctions on the island. Native species cannot cope with the arrival of invasive aliens. They die from predation and competition. The conservationists are… try[ing] to help local endemic species to survive… [by] killing and trapping invasive [ones].”

“If we ever get to fix the problems we caused on Christmas Island – [of the] lot of killing and dying on the island… humans should leave the [isle],” he added.

Would that ever happen? Well Zhao elaborates, “I heard that people are [recently] beginning to appreciate the wildlife on the island. Less and less robber crabs [are] being killed on the roads… [while] locals do not mind the roads being closed for a few months when the crabs migrate [now]. [Although] some people were protective of the cats initially when the officials started to cull them as part of a conservation project.”

Hence he optimistically culminates “Christmas Island, Naturally” in a speculative solution to remove all invasive species from the island once and for all, whereby humans, also a proverbial ‘invasive species’, opt to leave the place to preserve its unique ecology. This imagined scenario unfolds via his fictive conservation conference programme “Life After Humans – Rewilding Island Ecosystems” as well as through extracts from scientific papers presented then.

Zhao’s titular book “Christmas Island, Naturally” consequently as hopefully imagines the result of this thought experiment fifty years into the future. Containing 120 photographs and documents – like historical records and contemporary scientific papers – on the extinctions, the threatened animals – including its resettled human communities, and conservation efforts on the island; the limited edition book that targets an audience 50 years from now will be launched during the exhibition’s opening reception and is available for purchase.

This new series of artworks for the “Embassy of Disappearances” at Carriageworks thus continues Zhao’s appropriation of scientific language, tools, methods and even apparatus for juxtaposing with fabulist storytelling to further his enduring artistic aim of “advance[ing] unconventional, even radical, means of understanding human and animal relations” with their overlooked contradictions, assumptions and tensions, and hence related issues of morality and ethics, within an uncanny space between reality and fantasy; inviting us to reflexively contemplate the images and information presented in ways we need to constantly employ in an image-saturated world of ‘fake news’, especially when truth can indeed be stranger than fiction.

Indulge in a ‘scientifically’ documented suspenseful telling of the quest for survival by all Mother Nature holds dear at Robert Zhao’s “Christmas Island, Naturally” while the exhibition runs from 11 March to 8 May at ShanghART, 9 Lock Road, #02-22, Gillman Barracks, Singapore 108937… the odds faced are undoubtedly as dicey as Mark Watney’s as “The [stranded] Martian” on Andy Weir’s Mars.