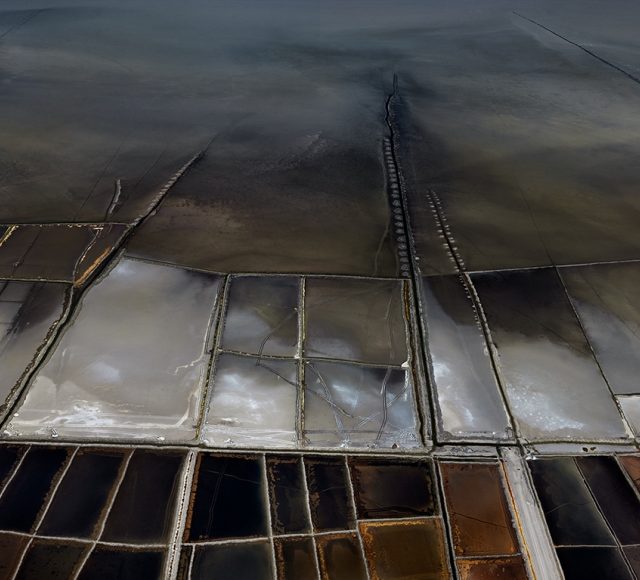 David Attenborough’s “Planet Earth” series with BBC Natural History Unit in 2006 is such an enthralling nature documentary that I was compelled to watch BBC America’s “Planet Earth Diaries” to catch glimpses of what it took to capture Mother Earth in all her natural glory; discovering that the less than 15 minutes footage of the rare but beautiful Birds of Paradise in the highlands of Papua New Guinea had involved cameraman Paul Stewart holing up for hundreds of hours in an excruciatingly cramped filming hide alone, going loony as old songs insistently loomed large in his memory, haunting him.

Such painstaking patience encapsulates the thorough artistic research Edward Burtynsky has put into the works displayed in his current “Salt Pans” exhibition. As part of his ongoing series exploring different industrialised landscapes across the world, this acclaimed Canadian had traveled to Gujarat, India, to repeatedly transverse by helicopter the terrain espousing the Little Rann of Kutch, a region that is home to more than 100,000 salt workers extracting around one million tons of salt from the floodwaters of the Arabian Sea each year; with the goal of understanding over the course of a day the immensely myriad workings of sunlight brilliantly hitting and reflecting off the equally diverse selection of salt pans and their surroundings of contrastingly parched ground over run by tracks that historically record the commencement of the collected seasoning’s arduous journeys to grace the kitchens and dining tables across the globe.

Here then Burtynsky’s aim diverges from Stewart’s. While the latter’s rests upon the element of almost pure chance of capturing on film an enchanting encounter with the targeted birds in their heaven on Earth, the former’s thrives on arriving at the precise time of day within an exact field of his camera’s lens at the specific angle of view from the aero-craft’s particular height in mid air to shoot a spectacular aerial outlook of the split second moment’s of magic wrought by the sun’s natural light on the very fertile sights he has set on the ground – an orchestration akin to the deftness with which mainland Chinese Jiang Pengyi uses a silver salt treatment to coax natural light to form surreal illusory and delicate Northern Lights pictorials on fluorescent paper and photographic film.

Each year thousands of poorly paid Agariya workers toil in the pans to extract large quantities of salt from the endless floodwaters. Furthermore, receding groundwater levels, combined with debt, diminishing market values as well as a lack of governmental support, threaten the future of this 400-year-old tradition and the lives dependent on it. Burtynsky’s astonishingly painterly photographs consequently skillfully capture the delicate balance between natural and human processes – the normal cyclical presence of salt in the earth’s bio-composition and our insatiable need to harness it.

The sobriety saturating the inevitable actuality that this way of life will in time become obsolete; causing the saltpans to forever disappear; solemnly tints Burtynsky’s perfectly snapped pictures in the same stunning way haunting Indo-British Singapore-based Kavita Issar Batra’s photographs, spontaneous or composed, of the bucolic colours and textures of detritus, unthinkingly littered by man and Mother Earth, gracing the pathways along which she leisurely wanders around her neighbourhood during her daily morning walks. While the subject matter differs dramatically, both artists have found beauty in the seemingly accepted absence of any aesthetics in both geographical locations; bringing instantly to mind Pakistani Adeela Suleman’s philosophical inspiration driving her creation of “Dread of Not Night” and “Blood Stains the Soil” – she has said that “the more heinous the crime, the more beautiful the (art) object needs to be”.

And splendour indeed suffuses Burtynsky’s ‘unusual’ landscapes of multi-coloured interlocking rectangles, spanning across the delta; finely showcasing his ongoing exploration of subtle modulations of tone and compositional balance of the pans with the calligraphic tracks from vehicles distinctly referencing scale and human activity. In so doing, ‘they examine this ancient method of providing one of the most basic elements of our diet; as primitive industry and as abstract two-dimensional human marks upon the landscape’.

As such, his present “Salt Pans” series exceeds the artistic merit previously set by his 2007 collection of “Silver Lake Operations” – of breathtaking shots of Lake Lefroy in Western Australia for his “Mines” series, by his 2003 set of “Alberta Oil Sands” awesome images of Fort McMurray in Canada in his “Oil” series, and by his similarly spectacular 1996 “Uranium Tailings” streaking through Ontario’s Elliot lake and the town’s “Nickel Tailings” through Sudbury in his “Tailings” series; all definitively excelling well beyond the creative realm established by the ‘unexceptional’ time-honoured countryside “Early Landscape” successions of photographs he had shot in the late 1970s to early 1980s.

In the adversities of man’s industrial activities Burtynsky has evolved compositional strategies that explore making the visual properties of modernist painting relevant to colour landscape photography; of applying Abstract Expressionist treatment of pictorial space as a dense, compressed field spreading evenly across the entire surface of a large composition to emphasize these pictorial concerns within the landscape tradition. And in so doing, he has attained similar success enjoyed by Singapore-born Australia-based Simryn Gil with her “Like Leaves” artworks and by Indonesian Syalful Aulia Garibaldi with his “Abiogenesis: Terhah Landscape” creations.

As Gil has innovatively conjured up divinely orderly pixel-like arrangements of trimmed little tidy squares of hundreds of ‘so ordinary they are overlooked’ fallen jambu laut foilage she had picked up in her Port Dickson hometown and as Garibaldi quantum leaps with his transmutation of ‘boringly mundane’ microscopic biological images of mycelia cellular growth onto his highly individualistic artistic prints, sketches, paintings and installation art; Burtynsky too has miraculously transformed ‘unimpressionable’ landscapes exhausted by industry into ones truly unforgettably memorable.

And in so doing, Burtynsky has wisely eschewed Japan-based Shinro Ohtake’s strategy of deliberately choosing what he deemed as ghastly colours to paint his protest of his country’s unceasing drive in the 1970s to determinately tear down the customarily historical and resolutely erecting the ultra modern in its place, in favour of Brazilian Sebastiao Salgado’s in incredibly compositionally bringing very much into plain sight the crystal clear reminder that only almost 46% of planet Earth is still as it was in its time of primordial genesis… and that we must hence, at all cost, preserve humanity and its aspirations alongside Mother Nature as she had been originally birthed.