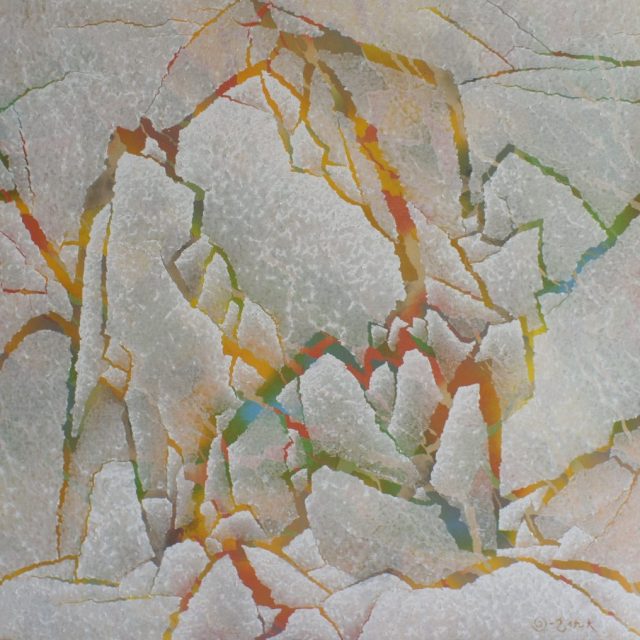 They say that necessity is the mother of invention. And it was certainly the case for mainland Chinese Qiu Deshu: this Shanghai-based artist founded the Grass Painting Society in the late 1970s to advocate the much needed independent spirit to applying unique techniques and original styles in painting.

Unfortunately, the political winds in China had changed yet again: emerging from Beijing was a campaign that criticized capitalist liberalization. When it arrived in Shanghai, the Society’s inaugural exhibition was forced to shut down and the artistic group itself was charged with attempting to gain independence from the Chinese communist party. And Qiu’s brainchild was quickly banned.

The early 1980s became a period of great depression and oppression for Qiu: he had felt deeply responsible for this forced closure, along with feelings of fear, helplessness and repression – he was subjected to endless sessions of severe criticism by government authorities.

Consequently, Qiu began to see the Chinese seal as a representative of the self as confined within the nationalistic culture of his homeland – a confinement he strived for release by ripping all the traditional signatory stamps he could lay his hands on.

Despite these attempts at self-salvation, he found that he was still a little frog in a bottomless well. Fortunately, his courage to challenge these intransigent and conservative traditions continued to prevail.

And so adversity turned out to be his mother of yet another innovation: in 1982, Qiu noticed the cracks on slant-covered ground in the small garden at the back of the Cultural Palace. They were like eyes staring directly and silently into the sky, just like he was in his spiritual defiance.

These fissures instantaneously became the catalyst to his “Fissuring” series of artworks – 1 that Qiu has continued through his experimentation of techniques and themes well over the past 2 decades.

‘Fissuring’ in Mandarin means a literal tearing and change. This Qiu does after he applies vivid colours to xuan paper – he tears up and mounts the painted fragments to a base layer on canvas, often leaving space in between to create a pictorial of ‘cracks’ that symbolizes his journey through life.

Hence, ‘fissuring’ art is his way of painting structure and integration through the simultaneous tearing, rubbing and carving up of rice paper; all done to showcase this material’s wonderful features: its whiteness, exquisiteness, pliability, semi-transparency and water permeability.

The ingenious result is a natural, free changing painter’s lines – the fissures. These flying, surprisingly lightning like forms express the co-existence between close-range tension and deep space.

At the same time, Qiu’s fissure art breaks the age-old tradition that ink is the very essence of Chinese paintings. The mulberry paper is no longer passive nor have subsidiary status. Instead, it becomes his means of composing the pictorial that carries his central theme, relegating the ink and paint to the background as negative space. So his works develop an organic sensation of darkness and light, very similar to bass-relief.

As such, he has created a totally new way of integrating rice paper and canvas, ink and oil, as well as painting and carving: while the effects of western modern art concepts are visible in his works, all his materials remain embedded in traditional Chinese resources.

His resultant abstract compositions, thus, bear colour schemes and shapes that suggest landscapes that evoke historical Chinese painting, of crags and peaks of age old mountains in China, with sensibilities of western Impressionism and digital art – all a revelation of Qiu’s own majestic view of nature.

Even then, he continues to hunger for perfection: in recent years, his latest series of monochromatic non-figurative paintings have taken him back to his origins of fissuring.

These deconstructed geometrical configurations are his attempts at further refining the dynamic energy and rhythm of fissuring – all done in his unceasing quest for the most quintessential properties of ink while giving primary prominence to the humbly pliable xuan paper.